After breaking down what I think was successful and what wasn’t in HOBL’s design I’d like to take a look at whether HOBL1 was successful as a product. Regardless of how I feel about the project personally, it was meant to be a profitable game that would enable me to work as a full time indie game developer. The simple answer is that HOBL1 didn’t enable me to do so and therefore HOBL1 was a failure as a game product.

I still think it’s interesting to look deeper into why and how it was a failure, because it’s not as simple as “not enough sales”. I also think these stories help inform other indie developers and can help future developers know if a project will be successful or not.

Show me the money!

Let’s get right to the point: Heroes of a Broken has earned $62,039.10 Canadian Dollars in net revenue since it was first available for pre-purchase in April 2013 (it was officially launched in January 2014).

This is number after the resellers (such as Steam) take their cut, but doesn’t include development expenses. Development expenses were about $6,000 to $12000, the exact number depends on whether you want to consider direct expenses only (art & sound) or other stuff like business setup costs, software, hardware, etc. These expenses do not include my time or living expenses. This results in income just over $50,000 CAD.

Where did the money come from? 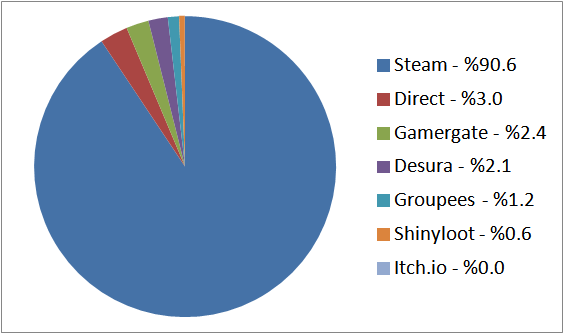 You can see that Steam pretty much dwarfs all other sources. I find it interesting that direct sales are #2 given my lack of marketing or advertising my direct sales channel very well.

What’s the problem then?

Now $50,000 isn’t terrible money, it’s an okay income in many places.  If I lived in rural China I’d be pretty wealthy!  However where I lived at the time (Toronto) the average family income is $82,859.  So it’s not a great income to support a family with, but a decent income as a single earner. It’s much less than I’d make as a full time programmer at a game studio, but given the freedom it might be worth the pay cut.

One obvious issue is this is $50,000 over 5 years. Now that doesn’t sound that great anymore. I had set aside about one years of living expenses to develop this project and it had taken a full year to make, so I was running out of money by the time HOBL1 launched.

Lets take a look at how the sales were distributed over time:

Wow Steam is a big deal, isn’t it?

2 months after launch you can see the income drops to almost zero. When your development funds have been spent and your sales dry up, you’re not left with a whole lot of choice. This type of cash flow problem is common for small businesses. At this point I decided to stop full time indie development and started looking for a job.

Lessons to be learnt

I don’t have any regrets about how HOBL1 went – I’m happy with the game, and I never expected my first full time game attempt to be a giant success, but I did hope it would be able to sustain me while.

Looking back I sometimes wonder, did I do something wrong? Could I have done something differently? Had I known HOBL1 would have done that well on Steam, would I have held out? Who knows. The past is past and the industry changes too fast for the specifics of launching my now 5 year old game to matter much.

What did I learn from this? A million small lessons in business and game design that are hard to summarize in a blog post.

Nevertheless here are some quick TL;DR points on why HOBL1 didn’t make me rich and what I could do better:

What does this have to do with HOBL2?

Since the numbers from HOBL1 aren’t terrible, and there seem to be a reasonable number of people who enjoyed the game, I think a sequel has a chance for success. I feel if the game was a bit tighter, more polished, marketed and available more widely from day one it could have been successful. I hope to take my failures with HOBL1 as lessons learned and apply them in HOBL2. However the indie game scene has changed so much in 5 years it hard to say what lessons learned are still relevant.

But Enough about money, the next post will be about how I plan on addressing the design issues from HOBL1 in HOBL2.